The Pentagon opted to give away about 13,000 used armored trucks earlier this year – for free! – because it thought that they have finally outlived their original purpose. 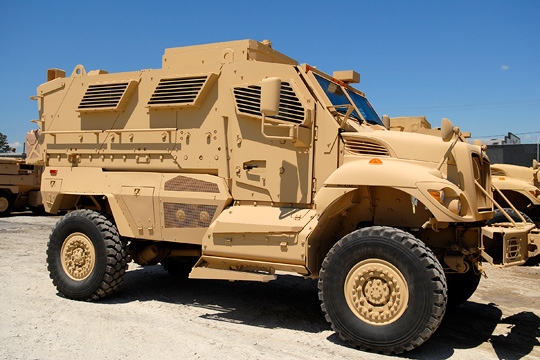 “There’s no more opportunity in holding on to what you don’t think you’ll need for the future,” Deputy Undersecretary of Defense for Acquisitions, Technology and Logistics, Alan Estevez said, referring about the vehicles called MRAP (pronounced “em-rap”), which stands for Mine-Resistant, Ambush-Protected. “We’ve notified our friends and allies that we have MRAPs available and if they want them they can have them,” he added.

“The price was right because it was free,” said Sheriff Captain John Crouse, “It stops bullets. It keeps you from getting shot.” Ohio State declined to comment. The police look at the bulky trucks as an effective way of showing force when it comes to situations like hostage crisis and civil disturbances; scenarios where SWAT teams are deployed.

Aside from lack of interest from foreign militaries, the give-away was also off-limits to private citizens and businesses as many of the trucks were equipped with machine gun turrets. That being said, with such a huge number of used armored trucks up for grabs, it was inevitable that some of the units weren’t going anywhere — except probably the scrap heap. This meant bad news for the defense contractors that made the trucks and supplied the parts; companies like Navistar International, Oshkosh Corp. and BAE Systems.

John Akalaonu, senior program manager for Navistar’s defense unit said that they’ve been trying to get the government to reconsider pushing the vehicles into the shredder. “The money has been spent to get these vehicles. It doesn’t make sense to just give them away or shred them,” he explained.

Navistar’s revenue fell 51% last year as demand for trucks and parts dried up, BAE was reported to have closed a plant in Sealy, Texas, while Oshkosh had to cut about 900 employees from its military-truck assembly last year.