Auto manufacturing giants Volkswagen, BMW, DaimlerChrysler AG and Ford all saw record sales in armored cars last year as the conflict in Iraq and concerns about personal safety are helping drive the market, according to a report by Bloomberg.

In Iraq, German carmakers are in a great position to profit as demand for armored cars continue to grow. “Iraq will give an enormous boost to business in the region because of the psychological fear about personal safety,” Schmidt of Automotive Industry Data says. “It’s mainly the Germans who will benefit because they’re better at producing prestige, bulletproof cars.”

Mike Vaughn, spokesman for Ford’s Lincoln division in Michigan estimated that major automakers sold about 22,000 armored cars last year around the world, with an average rise of 20 percent annual clip since the early 70s. As an example, Mercedes at one time managed to sell 55 armored vehicles to the Saudi National Guard at $350,000 each.

In the recent months, carmakers have been competing for prominent clients and are responding to the demands by introducing bulletproof versions of more of their models (ex. BMW’s compact 3-Series, and Volkswagen’s mid-size Passat sedan), and by including tougher armor and new features (ex. Bentley’s exploding door hinges and smoke canisters). 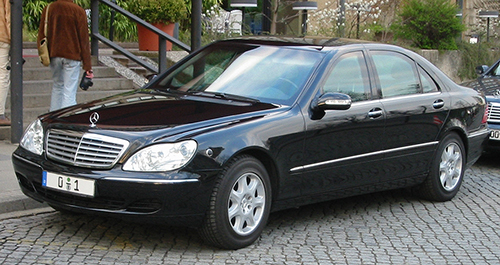 Armored vehicles are currently rated using an internationally recognized system. Vehicles with B3 and B4-rated armors are capable of providing protection from handgun attacks which include even the powerful ones like the .44 caliber Magnum, while those with B6 and B7-rated armors can thwart attacks from an assault rifle and a hand grenade.